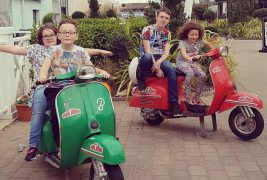 I have three children diagnosed with Autism, and I get so many questions from people about it. They ask if they are similar, have similar difficulties and similar traits. The one thing I can state

I have three children diagnosed with Autism, and I get so many questions from people about it. They ask if they are similar, have similar difficulties and similar traits. The one thing I can state for sure is that they couldn’t be more different.

My eldest is nearly 16, he was diagnosed at 5 years old, he was always ‘different’ and it wasn’t a shock when he was diagnosed, it just explained why he was the way he was. His schooling was a bit hit and miss, looking back I wish I never bothered with putting him through Primary School process, he was sent home frequently. A large part of it was lack of understanding, despite having his ‘statement’ the schools and teachers didn’t have much information on Autism and didn’t seem particularly keen to learn. However, he is now nearly 16 and his secondary school have been AMAZING. He has settled in brilliantly, he is a completely different child. The routine of secondary works for him, the short lessons with different teachers, in different rooms means bursts of work and plenty of breaks in between. I have no idea what the future holds at the moment, with Post-16 options still lingering in the air, this is something I will update on more when I know more. He is an amazing young adult, with a sense humour that teachers love (and some hate..) he has sharp wit and a brilliantly creative mind that astounds me daily.

My next diagnosed ASD child was Mark, he was diagnosed when he was 7. This was a bit of a shocker, as Mark is my quiet gentle soul, a stark contrast to his older brother (my only experience of Autism…) Mark’s ASD was not picked up by anyone until Year One at primary school when a teacher said rather bluntly ‘I think he has Autism’ and I was left shocked. Mark’s diagnosis was rather quick, he was actually diagnosed and discharged the same day (it was a long process pre-diagnosis) but it seemed like once they had diagnosed we were just cast aside with no information at all on how I could help him. As it stands now, Mark is still a gentle soul who enjoys his own company. He hates smells and loud noises, but he is in a primary school where he does have people he can play with, if he chooses.  Mark has a thirst for learning, he loves nothing more than watching documentaries rather than cartoons, and will wow you with facts about animals.

Finally, Bemma. She was never a happy baby, grumpy should of been her middle name. Always a fretful child, she hated people and despite speaking very early in amazing vocabulary to me, it didn’t take long to work out she was Select Mute. She will not talk to people in general, unless she really wants to, or unless she trusts you enough. I am still learning on Select Mutism, I have no idea how to help. Last week I was on a ‘All things Autism’ course with speech and language therapists and even they didn’t have any advice either. It is hard, super hard because she will go mute to me and the other family members sometimes, which although frustrating for me is heart breaking for them when they think she doesn’t like them. Emma was diagnosed at just turned 5, but the diagnosis has proven useful to help school to work out how best to deal with her. She is changing so much personality wise, and despite being a ‘masker’ (where a child can hide their issues) she is coming on hugely in her social communication. She still has a love of Turtles (it’s been about 3 or 4 years now!!).

So as you can see, the kids are all SO different. Jordan will eat anything, while Mark won’t eat much and certain foods make him gag. Jordan has no sense of smell at all (was born with none) while Mark has a sensitive nose and gags walking past Lush shop. Educationally, I think it’s still early days to know how Mark and Emma will cope as they get older but I do know that a supportive school is key to a good education. Life is too short for unhappy children, so I won’t be scared to change their education to fit them.

Autism is such a huge spectrum, and that huge spectrum is even larger than the large spectrum I have going on in my house. I think the important thing to remember is knowledge is wealth, and you can never stop learning. Don’t be afraid to try new things to see if they can help your child, visual timetables, timelines…there is loads of resources out there, don’t be afraid to ask for help.