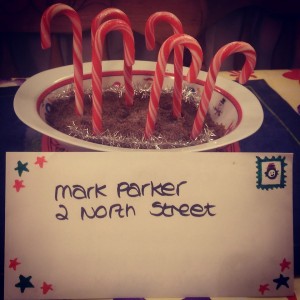 I first published this idea back in 2014 and it is one that I do every year with the kids. I hope someone else finds it useful as I love seeing what other people get

I first published this idea back in 2014 and it is one that I do every year with the kids. I hope someone else finds it useful as I love seeing what other people get up to with their elf.

I won’t lie, I LOVE Christmas. Mainly it’s the run up to Christmas I love, I love the Christmas songs, the festive feeling in town, and especially the Christmas coffee’s! With advent almost upon us, starting on Monday, I decided to create something to get us through the weekend.

With Elf On the Shelf arriving on 1st December, I sometimes struggle for ideas that will last, so I came up with something that can drag out a few days in one go….

So Saturday night a quick clonk of the letterbox and a special package was on the doormat. I asked Mark to go see what it was, and his face lit up when he noticed it had his name on the front! Obviously you could make this an Elf delivery to find in the morning.

Inside was a special letter from Buddy the Elf, some Elf Soil (muscovado sugar is quite thick and gloopy, but brown sugar works quite well too), a special Christmas bowl (pack of two from the 99p shop), and some Elf Seeds (Green tic-tacs). The instructions were clear and Marky set to work getting it all ready. His excitement was fabulous to watch. He carefully picked out 6 seeds, and potted them like a pro. The Elf Soil has a glorious sweet smell, and Mark was amazed that Elves have different soil to us! Mark then sung Christmas songs to his seeds, and he even made up some of his own Christmas songs. He keeps checking on them, just to make sure they are OK.

Sunday morning, Mark woke up and rushed excitedly to see his seed growth, and was amazed (actual open mouthed amazement) to see mini candy canes in the bowl, the seeds had grown! But he wasn’t allowed to pick them, as they had to wait until Monday before they would be ready.

Monday morning and Marky woke up just as excited, if not more, and when he saw this sight, was ecstatic. A little letter said well done to Marky for his fabulous Christmas singing, and Buddy the Elf told him to keep up the good work as he may be back soon….

Find me on Google+
Back To Top