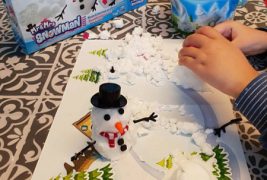 Last month at BlogOnToys, I had the opportunity to get my hands on a new type of modelling material, that looks like snow, but for indoors! So when a Floof delivery arrived at our house,

Last month at BlogOnToys, I had the opportunity to get my hands on a new type of modelling material, that looks like snow, but for indoors! So when a Floof delivery arrived at our house, I couldn’t wait to get stuck in and play with the kids.

We were sent three products from the range, the Floof bucket, Floof Mr and Mrs Snowman and Floof Modelling Set to get Floofing with. Included in the bucket is two packs of Floof, so you can either open it all at once for a huge Floof experience or just open one and save the other for another time. I love that the bucket reseals with the lid and you can keep the Floof from all the other sets in this one too. Mr and Mrs Snowman set, there is 120g of Floof inside the box, along with a snowy scene playmat, and lots of pieces of snowman parts so you can create the perfect snowmen. There is twig looking arms, two hats (one pink and one black) buttons, eyes, scarves and even plastic carrots for noses! The RRP of this set is £12.99 and it is such good value, it would make the perfect Christmas present or even a perfect elf on the shelf gift/activity, i’m sure the elves could have loads of fun with Floof. The Building set has a packet of 120g of Floof inside, but also has some tools to use, including a roller with changeable heads, brick pattern and one bobbly and it has two plastic tools too which are handy for cutting Floof with. You can make anything you want, and the handy tray that comes inside the box is brilliant for keeping Floof in one place, we decided to make an igloo using a bowl for a mould… Lots of people have asked me if its really messy like other modelling clay and sand, and I have to say it really isn’t messy at all, it isn’t sticky so doesn’t stick to skin, carpets and fabrics and it is so light that you can hoover it up any extra bits off the floor. I really love the stuff, and my kids do too. You can buy your own Floof from Smyths.

We were sent the products featured for the purpose of this review.