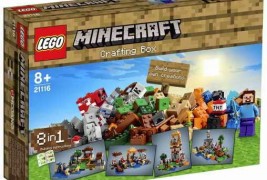 Minecraft has hit the world by storm, and my 12 year old is completely and utterly sold to it. He adores the game, and will spend hours talking me through his ‘creations’. But now, LEGO

Minecraft has hit the world by storm, and my 12 year old is completely and utterly sold to it. He adores the game, and will spend hours talking me through his ‘creations’. But now, LEGO have come up with the Official Minecraft sets, which means children, adults alike, can be just as creative in real life too!

There is 6 sets available… Venture into The Cave on a dangerous quest for vital resources! Wield the iron pickaxe to dig and battle against hostile zombie and spider mobs. Blast out valuable ores and minerals with the TNT and combine the flowing water and lava to create precious obsidian! When you’re done battling and mining, restore your energy levels with the chest of bread. Proceed with caution! Includes two minifigures with assorted accessories: Steve and a zombie, plus a spider. Nurture vital crops and supplies at The Farm! You’ll need food to survive, so fence in the livestock and channel the flowing water to nurture the crops. Harvest pumpkins, wheat, sugar cane and carrots. Use the crafting table to create a pumpkin helmet or jack-o’-lantern. But watch out for the skeleton with his bow and arrow after nightfall! Includes a Steve minifigure with an accessory, plus a skeleton, cow and a sheep.

Help Steve survive the hours of darkness with the The First Night! Use the daylight hours wisely to survive The First Night! Build a shelter and enclosure to protect your livestock, craft a bed, oven and a chest, but make sure you’re finished before nightfall if you wish to avoid the hissing Creeper™! Includes a Steve minifigure with weapons and assorted accessories, plus a creeper and a pig.

Set your imagination free with the LEGO® Minecraft™ Crafting Box! Create your own Minecraft models, build from the 8-in-1 instructions or follow the inspirational pictures and scenarios to complete other awesome Minecraft biomes. Use the periodic table poster to identify the LEGO Minecraft™ elements. You can even try out a diamond pickaxe! This set really boosts your creative potential! Includes a Steve minifigure with an accessory, plus a skeleton and a mooshroom. Prepare yourself for the ultimate battle!  Don your diamond armour and helmet, grab your weapons and step into this dayless dimension that floats in the void beneath starless skies. Seek out the dangerous Endermen that dwell in the darkness. Wield your diamond sword and bow to defeat the enemy. Then summon all your powers to confront the mighty Ender Dragon that hovers above the regenerative Ender Crystals. When you’ve slain the dragon, collect the dragon egg to create an exit portal. Includes a Steve minifigure with assorted weapons and accessories, plus three Endermen and the Ender Dragon. Enter The Mine at your own risk! You’ll need to don your iron armour for this dangerous expedition. Grab your iron pickaxe and venture into the darkness, keeping an eye out for hostile mobs that lurk deep in the mine. Plant the TNT and activate the explosion function to blast away the rock face. Then load up the precious ores, jump aboard the minecart and hurtle past the Creeper, zombie and skeleton, using the iron sword to keep them at bay until you’re safely above ground. All in a day’s work for a LEGO® Minecraft™ hero! Includes a Steve minifigure with weapons and accessories, plus a skeleton, zombie, spider and a Creeper™.

One thought on “LEGO Minecraft has landed!”