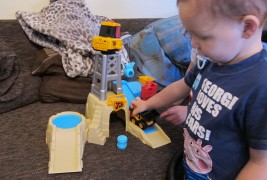 My children are a consumers dream, and Charlie Crane has been featured heavily on the TV ad breaks over the past month. So it was no surprise when my toddler declared that he wanted Santa

My children are a consumers dream, and Charlie Crane has been featured heavily on the TV ad breaks over the past month. So it was no surprise when my toddler declared that he wanted Santa to bring him Charlie Crane.

Christmas came early in our house, and the look on my sons face when he opened up his My 1st JCB Charlie Crane Playset was unbelievable, I can only imagine this is what Christmas morning will be like! Included inside the box is pieces needed to slot together to make the actual set. It was straight forward and once assembled it was a sturdy model. There is many features of the set.

There is the turn table where the JCB digger (which comes included) can manoeuvre.  There is the crane where the man (also included) sits inside the tower. the actual crane on top (which can be detached) has sounds and also moves with the use of the winch  On the right hand side of the set there is bricks which you can build up, and then smash down. There is also a funnel where you can put the bricks down, or whatever else takes your fancy. The road also has a flip bit on it, so you can flip the trucks off. But of course, this is only the things I have observed. Marky uses the clamp on the crane to hook everything up including the JCB digger! The great thing is that the different parts and accessories mean that toddlers imaginations can run wild and create something very special to them. My 1st JCB Charlie Crane Playset has got to be the most played with toy Mark has, he already has other JCB toys on his list now to create even more play with the set, I can just see a whole builders yard on the play room floor this Christmas!

We give this a massive five out of five stars, Mark loves it, the play factor is massive and it encourages imaginative play.

One thought on “My 1st JCB Charlie Crane Playset Review”