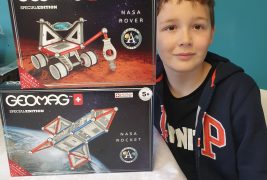 If you haven’t heard of Geomag before, it’s a unique magnetic building system which children construct using magnetic bars, balls and panels to form models. Geomag have teamed up with NASA to bring out two

If you haven’t heard of Geomag before, it’s a unique magnetic building system which children construct using magnetic bars, balls and panels to form models. Geomag have teamed up with NASA to bring out two new sets, both endorsed by NASA to celebrate their 50th anniversary of one of the greatest scientific construction projects, the first manned lunar landing. First up was the NASA Rocket, my son Mark (9) was excited to build these sets, his middle name is actually Apollo, and he is always interested in anything to do with space. Opening the box, we found a polystyrene box that was filled with the magnetic bars and balls. This box is reusable, and closes back up again afterwards to keep the bars and balls safe in one place. I opened the box like this, so we can store everything back in them afterwards, just to keep things tidy.

Building the Rocket was fairly straight forward, there isn’t a book of instructions included, just the simple instructions on the box.

The only issue we found was we didn’t have enough grey bars to make the model as per the picture, but used the red and blue ones as they are all the same size. The panels come empty and you have to pop the inserts out and put them in the clear panels, this is definitely easier to do before you start to construct the model.

The model was a challenge for Mark to make, which I quite liked as it gave him something to concentrate on, but he did get a little frustrated that the model doesn’t stand up after it is built, he would of loved to have something a bit sturdier to display in his room. We found this does fall apart fairly easily and can’t be played with as a rocket after. The RRP of this set is £39.99 and has an age recommendation of 5 – 10 years.

We then started on the Rover, and this was definitely more of a challenge. It comes with wheels, as well as the panels, bars and balls. It was a little challenging to put together, which again I like to give him something to work at. We found that the plastic panels are best well bent into shape on the folds before constructing. We found this a lot sturdier as it can support its own weight and be left out as a model on display. The RRP of this set is £25 and again has an age recommendation of 5-10 years. Mark has thoroughly enjoyed his introduction to Geomag, he hasa strong interest in space and NASA and these sets have encouraged him either more to research the different parts of the Rover and the Rocket and see the missions that they have undertaken, he doesn’t even realise this is education as he finds it so fun. The models are a great visual aid, something fun to do and the way the pieces are constructed with magnets and solid plastic, mean they are built to last and can be passed on once your child loses interest.

You can buy your very own Geomag NASA Rocket and Rover from the Entertainer toyshop, either online or instore.

We were sent the products featured for the purpose of this review, all thoughts are our own.