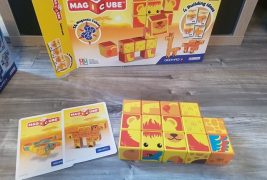 GEOMAG is a brand I am familiar with, my eldest son has had GEOMAG for year and overtime has constructed some amazing models from the small magnet pieces. But obviously it’s not very safe for

GEOMAG is a brand I am familiar with, my eldest son has had GEOMAG for year and overtime has constructed some amazing models from the small magnet pieces. But obviously it’s not very safe for smaller people, which is why I thought the new Magicube sets were such a good idea. Suitable from 18 months onwards, they consist of nice size blocks which have magnets inside. They are a nice size for small hands to hold, which means they can build easily with the blocks. We were sent two different sets, to see how my 4 year old daughter would get on with them. Opening up the Safari Park set, there was 14 different blocks inside, as well as two double sided cards with designs on. This set has an RRP of £35 With the age rating being from 18 months, I did worry that these would be a bit simple for Bemma, but that is totally not the case. The cards have designs that certainly stretch your brain and make you think about which side of each cube you need to create the design. For younger children, I am sure they would love to just stack and build different shapes but there is definitely scope there for children of an older age to still play with them, and enjoy them. We were also sent the Polar Animals set (RRP £27), this consists of 8 magnetic cubes which can make 4 different creatures from the two double sided cards included in the box. These include a polar bear, a whale, penguin and a seal. This is a great set for creating something different to the usual animals, and it’s a real talking point to learn about the animals you make too! Now is your chance to win your very own set of Geomag Magicube Safari Park worth £35! This would be a perfect Christmas present, so don’t delay, enter today!