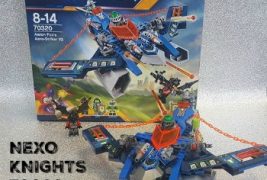 As massive LEGO lovers, we have a broad range of LEGO in our house, and NEXO Knights is one of our favourites, especially with Mark. We recently attended LEGOLAND Windsor as Blogger Ambassadors to see

As massive LEGO lovers, we have a broad range of LEGO in our house, and NEXO Knights is one of our favourites, especially with Mark. We recently attended LEGOLAND Windsor as Blogger Ambassadors to see the brand new 4d NEXO Knights 4d movie ‘The Book of Creativity’ which is showing in the resort now, check out our LEGOLAND Nexo Knights 4d movie review here for full details.

Presenting Macy’s Thunder Mace 70319. This set comes with 3 minifigures, including Crust Smasher, Macy and a Macy Bot. It also includes one NEXO power shield too (these are scannable with the new NEXO Knights Merlok 2.0 app) The set comes complete with two instruction booklets to complete the model, but the end result is pretty awesome.

It features pop up components which 2 rapid fire stud shooters, of course the wheels are all free rolling and being LEGO it means you have the scope to create the perfect NEXO Knights game your way!

The recommended age for this set is 8-14 years, and I would say that is perfect, it’s a concentration task for the younger scale of that age band, but it shows that a little dedication can result in something amazing!

Next up is Aaron Fox’s Aero-Striker V2 70320. This set is impressive! It features so many different components and includes 3 minifigures, Ash Attacker, Aaron, Aaron Bot as well as 2 Nexo Powers (again, these are scannable for even more fun!) This set is cleverly designed, it can be used as a vehicle but also as a handheld crossbow for you to use the back as trigger. Weapons include Macy’s Photon Mace, the Crust Smasher’s dual swords and the Macy Bot’s sword. It also has an ejectable mini flyer too. You can check these sets out, and join in the NEXO Knights fun online at: www.lego.com/en-gb/nexoknights