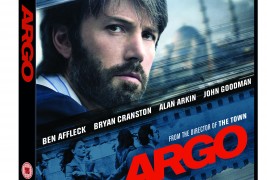 I love a good film, but I am very much small minded when it comes to picking one to watch, which is why I love reviewing for Warner Bros, it gives me a chance to

I love a good film, but I am very much small minded when it comes to picking one to watch, which is why I love reviewing for Warner Bros, it gives me a chance to get to watch something that I wouldn’t normally even pick up in the shop. Argo is our latest DVD to hit the doorstep, and with big names such as Ben Affleck, Bryan Cranston, Alan Arking and John Goodman, the sticker stating it had been nominated for 7 academy awards, BAFTA awards and Golden Globes, didn’t surprise me at all.  Looking into what the film was about, I found the following….

Based on real events, the dramatic thriller Argo chronicles the life-or-death covert operation to rescue six Americans, which unfolded behind the scenes of the Iran hostage crisis, focusing on the little-known role that the CIA and Hollywood played–information that was not declassified until many years after the event. On November 4, 1979, as the Iranian revolution reaches its boiling point, militants storm the U.S. Embassy in Tehran, taking 52 Americans hostage. But, in the midst of the chaos, six Americans manage to slip away and find refuge in the home of Canadian Ambassador Ken Taylor. Knowing it is only a matter of time before the six are found out and likely killed, the Canadian and American governments ask the CIA to intervene. The CIA turns to their top “exfiltration” specialist, Tony Mendez, to come up with a plan to get the six Americans safely out of the country. A plan so incredible, it could only happen in the movies.

The film was a brilliant blend of action and also funny moments chucked in for good measure. It left us glued to the screen, and my husband was keen to watch it again straight after. I would describe it as an action film with great entertainment value.

You can buy Argo on DVD from Amazon.