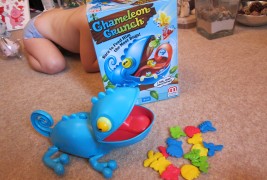 Chameleon Crunch has been advertised on many ad breaks this season, so when it arrived in the post for review my kids were singing the tune. They knew what it was meant to do, even

Chameleon Crunch has been advertised on many ad breaks this season, so when it arrived in the post for review my kids were singing the tune. They knew what it was meant to do, even the 2 year old!

Opening up the box we found it was a very simple set up, no assembly as such required, just pop the tail on the chameleon and pop the batteries in (3 AA batteries needed) , and you are ready to go. You can play two games with Chameleon Crunch, ‘Color Crunch’ or ‘Bug Crunch’. ‘Color Crunch’ means you choose a colour bug to be before the game starts, it then down to you to feed the chameleon your colour bug and get as many in as possible when he stops moving at the end of the game. ‘Bug Crunch’ means you a bug type instead of a colour, but the same theory applies, you put in as many as the type of bug as possible. Sounds easy yes? Well it’s not that simple. The Chameleon only opens his mouth at certains times to allow you to feed him, and he snaps it shut pretty fast so you have to be quick. He then speeds off again, and burps and spits them out. It means you have to quickly gather the pieces and feed him again, as you need as many pieces as possible in his mouth before he stops!

It is a great family fun game, but you do need a good 5 foot circle playing space. We used shortpile carpet and he worked fine, but they do say a smooth floor is better. It’s a game all the family can get involved in, regardless is you are 3 or 33!

I can see the cute Chameleon Crunch being a hit this Christmas, as it is in our house!

we were sent a Chameleon Crunch for the purpose of reviewing, all thoughts are our own.