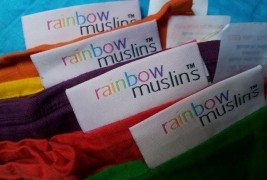 I first discovered Faye & Lou Rainbow muslins by chance, I was after some good quality muslins after having stacks of supermarket brands with Marky that were flimsy and just not very ‘wow’. I wanted

I first discovered Faye & Lou Rainbow muslins by chance, I was after some good quality muslins after having stacks of supermarket brands with Marky that were flimsy and just not very ‘wow’. I wanted bright pink ones and good old google pinged up Faye & Lou. I hadn’t seen any reviews on the muslins, and to be honest it was a gamble buying them as they are not cheap at £27.95 for a pack of seven. But with my niece due to be born and my sister also in love with Faye & Lou muslins, I decided to buy two packs, one for each of us. Some people asked me why I didn’t just buy some plain muslins and dye them, but I am not one to experiment with fabric dye (I know someone who ruined their machine with Dylon) and I wasn’t entirely comfortable using fabric dye near my newborn baby either.

Opening up the packaging I was not disappointed by the muslins, they were bright and colourful and each one had it’s own embroidered label, I like little touches like that.

But the real test is washing. I decided to put all my rainbow muslins and Cozio muslins in together, along with some other babygros etc, and I won’t mind admitting I was nervous at what state my load would be in after washing on a 40 cycle.

I opened the machine after it had been going all night, and also left for a few hours until I had got up, I was expecting all the muslins to have ran into each other, and was thinking ‘ah well, at least they will be unique’…but as I pulled them all out of the machine, they were perfect. No colour run, no colour loss, they look as bright as they did when they came out of the packet….but they do feel softer which is a big bonus!

So for all the people who keep asking me if Faye & Lou Rainbow Muslins are worth the cost, my answer is yes, they are awesome. I have tried them, tested them and they have passed with flying colours. The larger Cozio muslins are going to be great for swaddling, as moses basket sheets, and even in the pram. As a mum to 3, soon to be 4 children, I have tried many many baby products over the years and muslins are up there on my list of absolute must haves. Now, colourful soft absorbent muslins are even better!

You can find Faye & Lou Rainbow Muslins and Cozio Muslins online at: http://www.fayeandlou.co.uk/

I have not been paid to write about Faye & Lou Rainbow Muslins, all thoughts are my own from my experience. I did not even receive any free products in exchange for my review, but as many people keep asking me about them I thought it would better to get it down for the world to see.