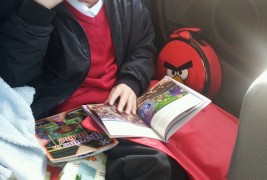 It has been a couple of months since our big move to the country from Essex. Now a move is a big upheavel for all children regardless, but with my 9 year old son J,

It has been a couple of months since our big move to the country from Essex. Now a move is a big upheavel for all children regardless, but with my 9 year old son J, I knew he would take some settling in time. J has Autism and ADHD, amongst other difficulties. As a result he can get out of sorts when it comes to changes in his routine, so moving house and school was a scary prospect for us. J was excited for the move though and was helping out every step of the way, including sleeping in the removal van on one of the many days we spent moving. He was our little helper while the other two children spent the week at Grannys while we moved.

J started his new school with the new school year. He had attended the school for a few hours before the end of term to meet the children he would be with, but there was no settling in sessions as such, and he hadn’t even met his teacher or seen the classroom he would be in. One of J’s difficulties is social interaction, and it was no surprise when he didn’t actually speak to any other children or strike up any friendships that day. But obviously I was still nervous when it came to him starting back on the first day of term. Luckily for us, our new county council have been brilliant and requested all J’s paperwork and statement of special educational needs and transferred it all over to the new school. The new school were really understanding and even spoke to me about the kind of assistant that they were looking to recruit for J, we felt really informed and hopeful that they would cope.

Now we are pretty used to J playing up at school, kicking off about something..I would often get a phone call from J’s old school asking me to go in and calm him down. I know it is very early days still, and I am half expecting it to all go back to how it was, but at the moment J is thriving. Before the summer holidays he was the least academic child you could find. He couldn’t read much, literally was struggling to learn to read his first 100 words…so when he bought home some reading books last week that had actual words inside, I was a little concerned that maybe they didn’t realise J’s capabilities, but J is loving the books, he is loving reading and has gone up a few levels this term for his reading already, as a special treat to say well done I treated him to a Skylanders book that he had spotted in a shop. The little lad was chuffed to bits!

So this sight this morning was a pure delight to see, J was in the back of the car while I drove the smallest to nursery, he had opened his book bag and was reading his books, totally engrossed! Long may it continue!