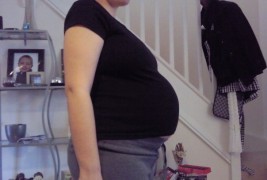 EQA7GHJS4H87 In all of my pregnancies I have suffered with HG, in my first pregnancy of course I had no idea what it was or even how bad it was. I knew that pregnant women

In all of my pregnancies I have suffered with HG, in my first pregnancy of course I had no idea what it was or even how bad it was. I knew that pregnant women got sick, so I lived with it and dare I say it, I got used to the constant gagging. I could literally work a shift at the restaurant and be talking to a customer, only to say ‘excuse me one second’ while I ran off to throw up. I would then come back and carry on as normal. I learnt to just carry on with life. I remember trying anything and everything to ease it just a bit, sucking sweets, sipping water…you name it I tried it. It was only when I collapsed one day and got admitted to hospital that I found out it was HG. I was hooked up to a drip and put on an antisickness IV drip. It took a couple of different medications before they found one that worked. It was only then that I could start to lead a normal pregnancy and stay hydrated! It’s no surprise when I say I was still wearing my size 8 jeans when I was 9 months pregnant, as I had only put a bump on and no weight anywhere else. Luckily my baby’s health didn’t suffer and he was born a very respectable 8lb14oz. 38 weeks Pregnant with my third baby.

When I fell pregnant with my second child Brooke, my doctor prescribed me the same tablets from my previous pregnancy. They were my magic pills and without them I couldn’t carry on. Again when I was pregnant with Mark I was prescribed the same medication, although I only needed it for the first 20 weeks which is a vast improvement from my first two pregnancies.

This pregnancy it was no surprise when the HG returned, I even awaited it from the second I got the positive test result! Again the same medication has been prescribed. I was taking it religiously but as I am now 13 weeks pregnant I decided it was time to see if I could cope without them. The first few days I was ok, not feeling the best but surviving. Yesterday it hit me with avengance. I got home from the supermarket and froze to the spot in the kitchen, I knew what was coming and there was no way to stop it. Luckily the kitchen sink was nearby (don’t worry I bleached it after!). I have worked out that when I am hungry I feel sick, so I have been grazing like a cow munching grass in the field. Only my grazing involves cheese sandwiches, choc chip cookies and sweets! Watch my bum expand!

Has anyone else suffered from HG? Have you found anything to help ease it? I would love to hear from fellow sufferers.